Uncovering The Extrovert From Within 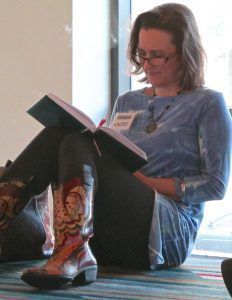 I grew up an only child. With no siblings to argue or share with, I created my own worlds of play and fantasy. I didn’t play team sports. I preferred to read and play make believe. I was often anxious around people I didn’t know. Hence, I spent a lot of time alone and grew up believing I was a lone wolf and shy.
This belief followed me into adulthood as beliefs are apt to do. As a lawyer, I worked alone. To the extent I was on a team, I took orders from my boss. Otherwise I sat in my office, researched and wrote. I could go a full work day without talking to anyone. I liked it that way. I often felt frustrated or insecure, when working with others. This confirmed my belief that I would rather be on my own. I even took the Meyers-Briggs personality test in 2006. Yes, I was an introvert. Even science said I gained my energy from being alone.
In 2011, I found the perfect solution to my loner, introvert ways. I quit my day job and started my own business. After 20 years of answering to a boss, I was ready to take my introverted, lone wolf and answer only to myself. It was perfect. I gained all the freedom I craved when I was in my corporate job. I did what I wanted, when I wanted and with whom I wanted.
Three years into my introvert’s dream, I was miserable and I couldn’t figure out why. Nothing about my business excited me. I hated networking, developing new business and sometimes even working with clients. The results showed up in the bank account. My business, which started strong, was struggling. 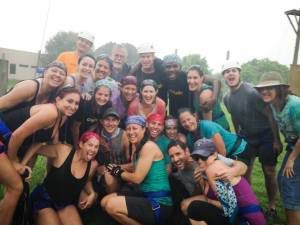 Feeling lost, I enrolled in a 3-part personal development course, hoping to reignite my business. In the final phase of the course, you operate as a team with the other participants. There is a team project and each team member is committed to the other members achieving their goals. Needless to say, I was nervous about this phase of the course. “I’m an introvert, I don’t like working with other people and I hate being part of a team,” I said to myself. This was going to be a long three months.
As the training was coming to a close, I was no closer to turning my business around. In the final days, I asked myself the following question. When had I felt the most energized in my life? I had often asked my own clients this question but never myself. I had two surprising answers. First, was when I had been part of a cross-functional team at my old job. I was engaged, happy, and productive. I felt as if life and work were clicking on all cylinders during that project. Second, was my current experience being part of this team. Holy Schizzle. Was I a team player? Did I really like working with people? It seemed I did. In that eureka moment, I realized my business was contrary to everything I was. Here I was working on my own. I was denying myself the energy I get from co-creating, leading, following and being in community. No wonder I spent tens of thousands of dollars on mastermind groups. I had convinced myself I needed the content and support that came with those programs. In reality, I didn’t need someone to tell me how to grow my business, what I needed was a team.
I spent the next several months processing the truth that I am an extroverted, team player. I faced all the times I said “I will never work for someone else” and what would it mean if I changed my mind. I faced the possibility that some people would think I was a failure. I had to face whether I thought I was a failure. So was the process of rewriting my life-long belief that I am a lone wolf, introvert. Eventually, I made the decision to find work in a team environment. As I feared, I took grief from my soloprenuer colleagues who thought I was selling out. I became ok with letting these friendships go. Yes, I would miss these friends, but I knew they couldn’t give me what I needed. I needed the energy that, for extroverts, comes from co-creation. I needed the energy that comes from collaboration. 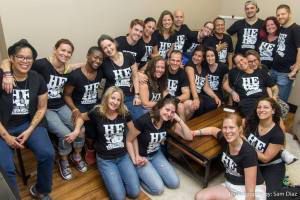 Today I lead a 20-person team and am part of a 40-person team that supports a 4,500 employees. Being part of a team is not always easy and sometimes it’s exhausting. Yet at the end of each day, I know my soul is more satisfied and more energized for the fact that I am part of a team. I even re-took the Meyers-Briggs test a year ago and guess what? You guessed it, I’m an extrovert.
It took several years and lots trials and tribulations, but I have shed the story that I’m a shy introvert. I now accept that I thrive when I’m my extroverted, co-creating, collaborating, leading and serving self.
Laurie Erdman is a life-igniting tour de force and speaker on a mission to inject love into the way we live and work. She is also a certified coach, writer and artist, as well as a business, training and human resources leader at a leading education technology company. She is the inspiration and architect behind a high performing human resources team that is igniting performance in over 30 schools nationwide. Laurie is also a contributing blogger to Huffington Post and other media outlets. You can download a preview of her upcoming book Exiting The Hamster Wheel and www.LaurieErdman.com