15% off use code FATHERSDAY22 at the checkout 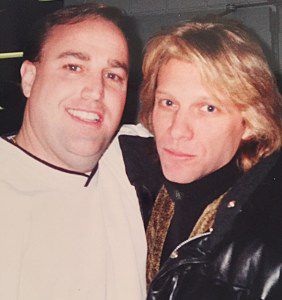 Think back to when you were just 16 years old. I went to a concert that would change my life. I remember seeing “him” flying across the audience about 20 feet above the air in a harness at Joe Louis Arena. He was eye level, and looking right at me in our nosebleed seats. It was as though he was singing just to me! That was it, I was hooked, a fan for life!

When I was in high school, I got a love letter from a cute boy with the lyrics from one of “his” songs. He didn’t know I was a fan and played the words off as his own. I knew then I met my soulmate and wrote him back with more stolen lyrics. I married that cute boy and fellow crazed fan and we had our first child. Doing what all loyal and crazy fans do, we named our first child after him. Our daughter was born in 2001, I could never have imagined that I would tell the man himself, that I named our firstborn after him. I would like to share with you just how our dreams came true and we received the most beautiful gift.

It happened one day when my husband was at work and gave a golf lesson to the doctor on staff for the visiting bands at Joe Louis Arena whose nickname was Doc Rock. Doc gave us a gift that to this day was the best gift ever. A gift that proves anything is possible and dreams do come true. Backstage passes to meet our hero.

In July 2001 I had a C­section and felt like a beached whale. I had maternity jeans and a long oversize shirt to try to cover all my fat. My whole life I was 100 pounds and now when I couldn’t be fatter and feel uglier I would meet my rockstar. I could barely walk, I was in so much pain that every step hurt. I remember squeezing my husband’s hand for support to get up the hill at Pine Knob (now DTE) and then it happened…… the phone call from Doc Rock. He told us to meet him at the steps left of the stage. He only had one pass so my husband went first and when my husband came back he said “ he’s on the phone at the bottom of the steps”. My heart was racing, it was really happening. Now it was my turn with the pass. I ran down the steps, no longer feeling any pain. Adrenaline took over and I stood right behind him waiting for him to get off the phone. The man’s voice I heard every day for almost 15 years and I had seen at every concert they ever had in Michigan, I bought every album they ever sold and I knew every word to every song ever made…. this was it !!

Now I was standing 6 inches away from him. I was so close that when he turned around, he jumped and because he jumped I jumped and then three bodyguards all jumped between us. He called them off and I was able to tell him how much his music had meant to me. I had him all to myself. I told him we named our daughter after him and he touched my forehead and told me to get well as if to heal me. He was genuine, kind, sweet and really funny. Knowing he didn’t like to take pictures I didn’t even ask, but years later we met him again and took a picture with my husband.

Later in the evening Doc Rock got us 2 backstage passes and we had so much fun seeing what went on backstage, seeing the band get ready before going on stage, meeting Tico ( the drummer) and talking to him about his art and Rockstar baby line. We spoke with David ( keyboardist) who was super funny and so nice. I even bumped into Richie( guitarist ) who gave me a big smile and hello.

We sat on the back deck, and people watched and eventually went out front to watch the concert. With our passes we were told we could sit anywhere as long as the seats were empty. We found two seats in the second row… until Security came by and wanted to see our tickets. By this time the concert had started and we pointed to our backstage passes and Security started to escort us out. Without missing a beat while singing a song he (our man) signaled for security to let us stay. Everyone around us thought we knew him personally.

My husband and I agreed that this was the best night of our lives!

I started out to be a fan and ended up with a lifelong role model. John Francis Bongiovi, Jr. is a philanthropist, dedicated husband, devoted father, rock star, actor, singer, and songwriter. He is one of the most amazing people on this planet. The world is a better place because of him. If this ever gets to him…. thank you Jon Bonjovi (as most of the world knows you) thank you for everything!!