Each time you travel it is an invitation to view the world from different perspective. I love it.  Meeting people in all walks of life is another gift of the journey.  The story below is true story from my recent travel to Chicago with my friend Angela and it is simply a reminder of you never know who and how you get connected to people.

“Chicago looks pretty lonely at night, I am a bit surprised.  I always thought it would be like a bee hive even on a weeknight” I said to the Lyft driver, introduced to us as Lance.


“Oh, yeah.  It does tone down during the week, and it is busier on the weekend for sure”, Lance said with Prince singing in the background.  “I like your taste of music” said my friend Angela.

“Thank you, I really appreciate you say that as I am musician.”  With excitement in his voice, Lance told us he has his own band called “The Circle View”.


“What part are you in the band?”  asked Angela. “ I am a guitar and lead singer and do keys.  We have travelled all around the country and internationally held concerts and open mic performances. Lyft is something we all do to help support our dream and hopefully not for much longer.”

Lance proceeded to tell us the story of how he just signed management deal with none other than Phill Q (Phil Quartararo) himself.  “Do you know who Phill is? “

Lance proceed to tell us Phil has been involved in  the careers of Josh Groban, Spice Girls, Madonna, Goo Goo Dolls and other like performers.

Now that you ask.. Here is the story..”I was working for Uber and it was my last day as an Uber driver when got dispatched for a pick up at a hotel downtown Chicago… I believe timing was perfect.  I picked up a man and his two boys… I did notice the “guy” was generous as he tipped the luggage guy well.

When they all settled in the car, “the guy” (Phil Q) told me the boys have never taken Uber before and to give them an experience.   While showing the boys around Chi town, I was able to overhear Phil mentioning names that certainly sounded like the names of celebrities…


I did ask him what does he do and he replied “I am in the music business”.... Instantly I knew this was the opportunity I must take… I summoned up all the courage to tell him about my band and ask if he would be willing to hear some of our stuff.


He responded “Here is what… if you can take us to the airport in less than 20 minutes I will give you my personal email address.” … The pressure was on as it was the prime time rush hour … This is one time where being native of Chicago made all the difference and we pulled up to the airport in 17 minutes…


Being a man of his word he wrote down his email address on a piece of paper and attached a request… “If you do not hear from me, it is because I did not like what I heard…” so please do not reach out.  “If I like it” you will hear from me…

I ran home, put together my best recordings and click the send button immediately…


And I heard nothing for six months…

I almost forgot about it… until the day when California phone number showed on my phone.  I knew it was Cali number as I have family living in California…


“Lance.. This is Phil…I really like your music, I have to be honest I did not think I would, but I really like what I heard.  I I would like to bring you out to California to meet some people …”

Still in shock… I responded “I will pull this car over and hop on the plane now.”

“No, no…Phil replied with a chuckle,  I will bring you out soon…

“being round because it is the most energy-efficient configuration.” Hence the name was derived to create high energy music.


By that time, we pulled up in front of our hotel.  Before we parted we took photo with Lance and exchanged well wishes for his aspiring band success.


All I could think of… Success lies in many aligned moments catapulted by the one when YOU choose to be courageous and ask for the opportunity…. 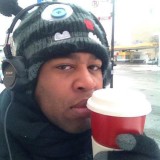 I have known Lance for years, and have had the pleasure of performing with him in previous incarnations of his band on several occasions. He’a A great talent, and a great soul, and I actually just interviewed him recently for my podcast. Came across this, and wanted to say kudos for shining a light on a genuine Chicago soul.