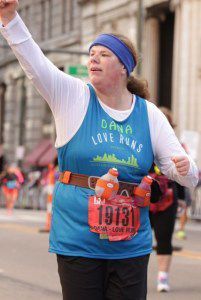 By Sheila
When my daughter, Dana, told me she wanted to walk/run the Detroit International Half Marathon with our group from church, I wasn’t sure what to think. A quick background, my husband and I became a part of the “Ridgerunners” at our church back in 2012. At that time we signed up and completed the Chicago marathon while raising money for clean water in Africa. We continued to stay involved over the next few years. Dana at some point decided she wanted to give it a try and do it too.
One thing about Dana, she is 26 years old, cognitively impaired (born with monosomy 21) and has very mild cerebral palsy. She is not the most coordinated and running is a challenge. Her feet are not shaped normal and are very small for her body. Nothing about “running/walking” a half marathon sounded great. The Detroit International Half Marathon is not for sissies. To get over the bridge to Canada and back through the tunnel without getting picked by the sag car was going to be a challenge for her. The mission that we would be raising money for was Human Sex Trafficking. While she understood the basics of that, she simply wanted to “try it and help people”. 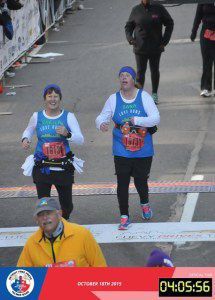 Dana was so very excited when we went and bought her a “good” pair of running shoes for this venture. Her excitement at the shoe store was contagious and our sales guy couldn’t ask enough questions about “why” she was doing such a thing when she’s really never even ran down the street. She was so nervous about her first group run until she realized she didn’t have to race anyone. The team welcomed her with open arms and most found her quite entertaining. Dana LOVES people so having all these new friends was amazing to her. As hard as the run/walk was for her, she focused more on encouraging others and making sure they were doing ok. She has a true knack for knowing when someone is struggling and will go out of her way to help in any way she can. She loved the group runs. 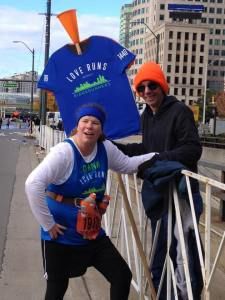 A couple things came up that put a damper on things. First, she started limping which really concerned me. Dana does not have a normal pain tolerance so she rarely complains about anything. When I took her to the orthopedic doctor (totally expecting them to tell her to stop what she was doing), they simply gave her some orthotics and told her to go for it. Then, I had to leave for Florida for long periods for family reasons so I wasn’t around much to do this training with her. With me gone, she only made team group runs once or twice a week. Still, she was determined to do this. Her amazing teammates would pick her up for the long runs and encourage her all the way. At the same time, she was determined to have fun and encourage those around her. Comments from some of her teammates:

Kat: There are people you meet in your life that will have a profound change, not because of what they can do for you but because of how they inspire you. Dana led that charge for me in 2015 while training for the Detroit half marathon. Her attitude and diligence while training was great, but her constant support of those around her made the impact. She constantly checked on my sister’s welfare while out training and made sure through texts and messages that I stayed on track and kept up with my training. There were days I did not feel like getting out and getting my miles in and I would receive a text “Hi Kat Goble” “Did you do your miles?” And so off I would go! Not only is she inspiring for completing the training and half marathon, she has become a beautiful friend I am blessed to have in my life.
Albert: Dana had such a sense of spirit, and purity of heart. Her determination and strength was infectious. Seeing her on the path lifted me no matter how I was feeling. I was told by a couple of teammates they would not have made it without me. The truth is I wouldn’t have made it without the new runners like Dana.
Mar Cy: Dana always made sure to cheer me on when she’d see me struggling through those last 2 miles. She is a true believer in “nobody left behind!” She would redo those last miles with me to be my personal support team and grab my hand to help pull me through that last 1/2 mile. She cheers the loudest and always gives the best hugs! And although I was planning to be a ‘walker’ only, she helped me turn into a ‘runner/walker’ which helped tremendously on the actual marathon day.
Bob: I was lucky enough to run/walk with Dana during our 12 miler. During the whole time she never worried about herself and she always asked people behind us if they are ok and then she would give them an encouraging word. That day was by far the most special day I had running last year.
Susan: Dana was my God motivated support pal this past summer. She always had just the right words to say, like “I’m here for you, Susan” or “You can do this; you’re strong”. She was an amazing inspiration to me & I love seeing God in her. It’s beautiful.
The above is what is so awesome to watch in Dana. She loves to see people happy and doing well. While it was very abstract for her raising money for this “cause”, when we talked about Human Sex Trafficking, it really bothered her. While each of us had a “goal” to raise $1,440.00, Dana persevered and raised $2,400.00. She struggles with the concept of money, however totally “gets” people and how we should all be there for each other and encourage one another. As Mar Cy stated above, nobody should ever be left behind. Everyone deserves to be treated well and with respect.
The day of the marathon was exciting. We worked so hard to get to this point. It was COLD that morning and we had snow flurries at the start. The start of the race was fun, but quickly around 1.5 miles, Dana lost her spark and I knew we were in trouble. Dana was cranky and wanted to be done. I could not figure out what was going on with her. With her cognitive disability, she is not always good at expressing and asking questions. Finally, after running over the bridge to Canada and making our way through Canada Dana says, “are we allowed to stop and go to the bathroom?” Seriously, she was miserable from the get go because she was afraid she couldn’t stop to go to the bathroom? Those “little” things always break my heart. She doesn’t want to do what’s wrong if she can help it. So, around mile 4.5-5 we found a port-a-john and I had my Dana back. She was joking and encouraging with all the other runners, gave high five to all the border patrol and police officers working the race. She called out to spectators…..she was Dana…..loving life and enjoying the journey. 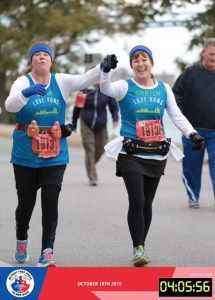 We made it through the tunnel with no sag car in sight (our fear was getting back into the USA in the time allotted. She did NOT want to get picked up by the sag car). The last couple miles Dana really started to struggle. She was sore and hungry. There was one point she just didn’t know if she could do it….before I could speak up a young girl behind us said, “you can’t stop now, you got me this far so I know you will get me across that finish line”. Neither Dana nor I realized this young girl behind us was totally being entertained by Dana and she wasn’t about to let her stop. Once Dana could hear the sounds of the finish line and teammates cheering her on, she dug deep and finished the race. She did it!! Dr’s who told me when she was born not to get too attached as she probably wouldn’t live long, and if she does her cognitive abilities would never be beyond a 1-3 year old. They don’t know the determination and drive this girl has. She loves life and loves people. I’ve truly learned more from my daughter than anyone else I know.

And just as an update, she lives in an amazing residential house and works at an Assisted Living Facility in the Activities department. Let’s just say they love here there and just try and let some of those residents hide out in their room. Dana will have them out playing balloon volleyball before they know it.