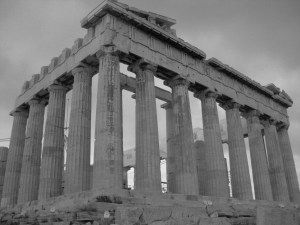 In 2009, I traveled to Greece to visit an old friend. After a week of exploring the northern country (specifically, Thessaloniki), I took a train by myself to Athens, where after two days I would fly home to Detroit. My plan was to stay in a hostel near the city center where I could easily access and navigate Athens. I knew exactly what I wanted to do, but in the truest form of myself as a traveler, I purposely hadn’t planned how I was going to do it. I’d figure it out, and I looked forward to that. I always do.

When I settled into the hostel, I grabbed my backpack, filled my water bottle, and made my way to the front desk. I asked the man sitting at his computer how to get to The Acropolis.

“Go outside, turn right at the kebab vendor, walk two blocks, go left, and it will be in front of you,” he said.

“It’s that easy? I’m not terrible at directions, but I’m also not good at directions. You’re sure I’ll just see it?”

“Yes,” he replied curtly, continuing to type without making eye contact. It was obvious I was annoying him, so I thanked him and went on my way.

Sure enough, after less than oh, maybe five minutes, I was staring at The Acropolis. I walked towards it, paid my entry fee, and began walking. I slowly and happily walked up, up, up, pausing to take pictures of The Herodian, The Erechtheion, and eventually, The Parthenon (all of which, it should be noted, completely blew me away). I spent the better part of two hours observing the structures, wondering how they were able to stay intact since their various reconstructions (between 480 BC and 160 AD), and of course, taking copious amount of pictures.

On my way back down, I stopped to order a coffee. Seemingly out of nowhere, a man from behind me struck up a conversation when he heard me order my drink.

“You’re from The States?”

“Me too.” I tried to ignore him, because Strangers, but he didn’t let up. He said he heard my “accent” and decided I was from the Midwest; he was, too.

We made standard small talk for a few minutes as we continued to walk; in full disclosure, I was in no mood for a conversation with this guy. I was tired, I was hungry, and all I wanted to do was enjoy my coffee and put my headphones on. But I decided to go with it, because I didn’t know how to shoo him away without being a less-than-ideal version of myself. So we kept chatting. He told me that he was in Athens for the 6th time.

“Six times? Really? Do you just love it that much?” I asked, shocked. The thought of coming back to Greece, or to any country for that matter more than once, seemed ridiculous to me.

“I do. I’m here for work, though, so it’s not much of a vacation.” His ambiguous reply annoyed me, but I bit the bait.

“I’m a Professor of Ancient Greek Archaeology and Architecture at the University of Pennsylvania,” he replied. “I’m here for an annual conference.” Oh. Naturally. As one is, right? My mood quickly turned. I could feel that my day was about to improve. 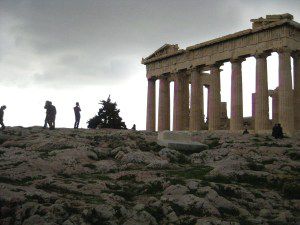 The Professor and I spent the better part of the day talking about life and love and education as he walked me through Athens. We went to the New Acropolis Museum where he would tell me the history behind various artifacts and paintings. If he heard a museum tour guide talking to their group, he would always stop to listen, because, “The Greeks like to think it was This War or That Crusade that made things this way. But they’re wrong. They’re prideful. Here’s what actually happened.” I was floored by his intelligence and grateful for his guidance as we moved through the museum’s collections.

We made it to Zeus’s Garden, Syntagma Square, and a popular bizarre. The day ended with dinner at his favorite local restaurant where we continued our conversation and I asked him what felt like a thousand questions, each of which he answered patiently and politely. At the end of the meal, he made sure I knew how to get back to my hostel. We hugged and parted ways. I thanked him profusely for talking to a stranger, and for the day that would not have happened without him.

This experience changed the way that I now travel. It taught me to be more open to my surroundings and the people in those spaces, rather than just to put headphones on which effectively isolate. It reminded me that a simple conversation can unlock an entire world around you if you are willing to connect to someone (which, admittedly, I was not willing to initially). But you learn, and you grow, and you hope that the next time you travel you stumble upon another Professor of The-Things-The-Country-Is-Known for. Or, at the very least, you make an effort to connect, even if it’s only asking someone where they are from.

Laura is a middle school English teacher in metro Detroit. She spends her time reading, working out, listening to podcasts, hanging out with her friends and family, and playing with her pup, Billy. During her time off from teaching, Laura travels as much as she can, and is always on the search for her Next Adventure.